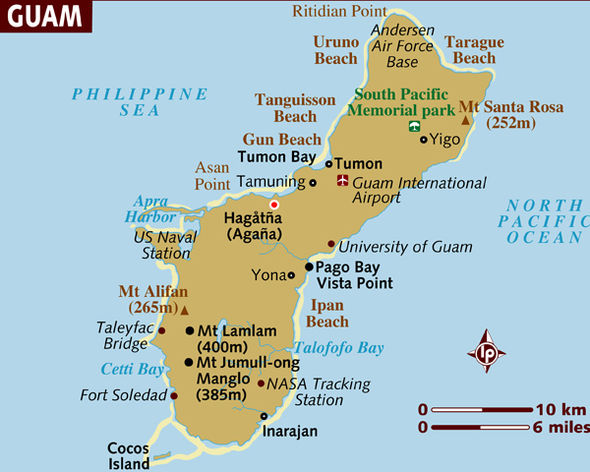 Geography: The US-Flag Territory of Guam is only one island totaling 209 square miles. It is located 1,500 miles due south of Tokyo, Japan and has been a US territory since the end of the Spanish-American War in 1898. Guam is the wealthiest of the USAPI jurisdictions with a per capital GDP greater than one half of the US ($35,600) and is the only USAPI with potable tap water. It is a transportation entry port for the Pacific and is a key US military outpost where the military controls roughly one third of the island. These factors, coupled with other social and economic issues, make it more vulnerable to emerging infectious diseases. Recent relocation of military troops and operations from Okinawa, Japan to Guam has increased Guam's population in the recent few years. The growth of military personnel and civilian support workers exerts a substantial strain on the current local health workforce and infrastructure. English and Chamorro are the primary languages with a literacy rate 99%.

Health Services: As a military outpost, Guam boasts a Naval Hospital with outpatient clinics, emergency services, and support services. Even as a large, single island nation with the highest GDP in the USAPI, the IMR in Guam still stands at almost twice that of the US (Guam 14/1000 live births, US 5.8/1000 live births).

Demography: Guam, whose citizens are considered US Nationals, has a population of 167,358 people made up of 37.3% native Chamorro, 26.3% Filipino, 7.1% white, and the remaining 30% being other Pacific Islanders. The percent of population below FPL is 23%, the lowest in all the USAPIs, while the GDP is $35,600, the highest in the USAPIs. Youth and elderly dependency ratios in Guam are 52.3 and 13.6 respectively.

Sociocultural determinants of health: US National Defense spending and tourism are two of the main sources of income for the island. The low unemployment rate (4.5" as of 2017) and high GDP, as well as ease of access to health care services play key roles in the low IMR relative to the rest of the USAPIs.