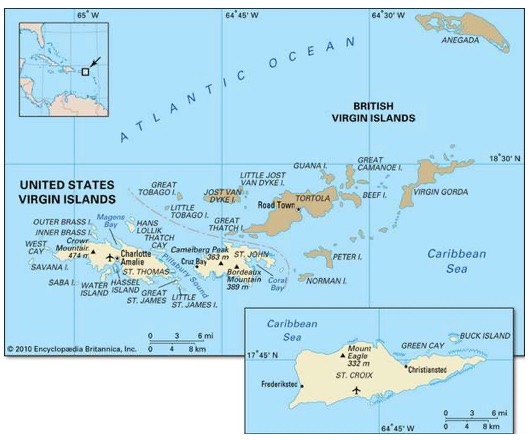 Geography: The United States Virgin Islands (USVI) is an unincorporated territory of the United States, situated at the eastern edge of the Greater Antilles, 43 miles from Puerto Rico and more than 1,100 miles from the US mainland. The territory is geographically part of the Virgin Islands Group, which also contains its near neighbour, the British Virgin Islands (BVI). The USVI population live on 133 square miles with St. Croix being the largest at 84 sq. miles, St. Thomas, 32 sq. miles, and St. John, 20 sq. miles. The climate of the U.S. Virgin Islands is tropical, hot all year round, with a relatively cooler period from December to April. The temperature ranges 82-88 degrees. The capital is Charlotte Amalie, St. Thomas and the official language is English.

Population: The 2014 Virgin Islands Community Survey (VICS) reports a population of 102,007, which is a decrease from the 106,405 individuals reported by the 2010 census. The population of the USVI comprises various groups of people from many places. Currently the largest group of Virgin Islanders born outside the territory were born in countries and other independent territories of the Caribbean, especially the eastern Caribbean Islands.

Ethnicity: USVI population is a multi-ethnic and multiracial population. Of the total population, 77% are black, 10.5% white, 12.5% other races and 17% of the population identify as Hispanic origin according to VICS 2014.

Government: The organization of the GVI is based on the Revised Organic Act of 1954, in which the U.S. Congress declared the USVI to be an unincorporated territory of the United States of America. The U.S. Constitution and this act are the essential documents that govern the USVI.

The GVI has three coequal branches of government: executive, legislative, and judicial. Executive power is vested in the governor, who, along with the lieutenant governor, is elected by qualified USVI voters for a four-year term. The governor is restricted to two consecutive terms. Legislative power is vested in a unicameral legislature of 15 senators, seven from St. Croix, seven from St. Thomas, and one at large who must reside in St. John. Senatorial elections occur every two years. Judicial power is vested in the District Court of the Virgin Islands, the Supreme Court, and the Superior Court of the Virgin Islands. The USVI is represented in the U.S. House of Representatives by a nonvoting delegate elected by USVI voters for a two-year term who can sit and vote in committee.

Economy: Economic conditions improved after the impact of hurricanes Irma and Maria in September 2017. According to the United States Virgin Islands Comprehensive Market Analysis (VICMA), during the 12 months ending July 2019, nonfarm payrolls increased by 400 jobs, or 1.2 percent, after declining 11.7 percent during the previous 12 months. The unemployment rate in the territory averaged 6.6 percent during the 12 months ending July 2019, well below the 11.6 percent rate during the 12 months July 2018. For several years, unemployment rates have been higher in the USVI than on the mainland. In 2017, the Virgin Islands Bureau of Economic Research (VIBER) reported that the major areas of employment are the Government of the Virgin Islands, services, leisure and hospitality and the retail and wholesale trade.

Tourism: Tourism is significant to the economic foundation of the USVI. Despite the lingering effects of hurricanes of 2017, the territory welcomed 1.94 million visitors and received $1.0 billion in tourist related revenue in 2018 (VIBER). The number of jobs in the leisure and hospitality sector, which benefits most directly from tourism declined dramatically following the hurricanes but still accounted for 13 percent of total nonfarm payrolls in the territory during the 12 months ending July 2019.

Poverty: Poverty remains one of the greatest threats to our children's wellbeing in the USVI; 18.4% of families in the USVI were living below poverty level according to the 2014 VICS report.

Medicaid: Medicaid is a government-sponsored program that provides health coverage assistance to people with low-incomes. Medicare, also called Medical Assistance Program (MAP), is designed to make adequate health care available to children and adults who are unable to meet the cost of their medical need. The program is funded by the federal government and administered at the state level. Clients receive assistance paying for things such as doctor visits, custodial care costs, hospital stays, hotel accommodations and airline cost and more.

CHIP is the Children Health Insurance Program that is offered to children under the age of 19 who make too much to qualify for Medicaid but cannot afford regular health insurance. In the VI, CHIP falls under the MAP. All services provided by the CHIP are free including doctor visits and check-ups, vaccinations, hospital care, dental and vision care, lab services, X-rays, prescriptions, and emergency services.

The VI has also implemented Presumptive Eligibility (PE) as another entrance to enroll in Medicaid/CHIP Programs. The PE process allows uninsured individuals who need medical care to be temporarily determined eligible by certain providers when they appear at the facilities. The PE allows persons to complete a brief PE application and self-attest to all information on that application and be immediately determined eligible if they qualify, and receive services immediately paid for by the Medicaid and CHIP program. VI enrolees do not have the freedom of choice (FOC) to go to any provider that they would like to receive service from as Medicaid employees in the states.

Due to the Medical cap imposed by congress, the territory's residents are not eligible for the Supplemental Security Income (SSI) Program, which provides assistive devices, therapeutic or rehabilitative services beyond acute care to children under the age of 16 with disabilities. The Title V program provides these services on a limited case by case basis.

The onset of the Covid-19 pandemic in March of 2020 caused the VIDE to restructure the 2019-2020 school year. VIDE suspended in-person teaching and implemented remote learning. Computers and internet devices were distributed to students in need of these items. Priority was given to 12th grade students earning less than a 70% GPA requirement as of March 17, 2020. The online educational platforms, Edmentum, Acellus and iReady remained accessible through the end of the school year to allow students the opportunity to improve their grades. VIDE consolidated breakfast and lunch distributions in its "No VI Child Goes Hungry Initiative." In an effort to stop the spread of the virus, all school activities were cancelled including sports activities, prom and graduation. However, a virtual graduation was held for graduating seniors.

Head Start and Early Head Start (EHS) provide free learning and developmental services to children birth to five years of age and pregnant women. There are only two Early Head Start programs in the territory, and they are both located in the St. Croix district. In the 2019 edition of Kids Count during the 2015-2016 school years, 158 children ages zero to three were enrolled in EHS programs throughout the territory. There were 45 Head Start centers in the territory: 26 in St. Croix, 18 in St. Thomas and one in St. John. During the 2015-2016 school year, 965 total children were served.

Housing: The average price for homes on St. Croix and St. Thomas rose to $368,000 during the first seven months of 2019, a 10 percent increase from the same period in 2018. Demand or sales housing, particularly by non-residents, declined dramatically following the hurricanes but has since resumed. Supply remain limited, however, with some severely damaged homes for sale yet to return to the market and many others being converted to rental units in response to tight rental market conditions. As a result, the inventory of homes for sale declined in the territory and prices increased during the past year.

Relatively low incomes, high construction costs, limited developable land, and strong demand by non-residents of the territory seeking to buy a home have contributed to an ongoing affordability problem for residents of the territory seeking to purchase a home. Homeownership in the territory is also limited by significant barriers associated with financing. The largest of these barriers is homeowner's insurance, which was about four times more expensive than the states as a whole before the hurricanes and is estimated to have increased as much as 20 percent since the hurricanes of 2017.

Historically, renter households in the territory spend a larger portion of their income on rent than those in the rest of the nation. This issue has been compounded by rapidly increasing rent since the hurricanes. Based on the most recent data available, the median gross monthly rent was $848, which represented 39 percent of the median monthly income for renter households. The high cost of living and relatively low wages in the territory, subsidized and other low-income rental housing is extremely important. Subsidized housing accounts for 25 percent of the total rental inventory in the VI. The primary provider of subsidized housing in the territory is the Virgin Islands Housing Authority (VIHA) that manages 26 public housing communities with a total 3,014 units.