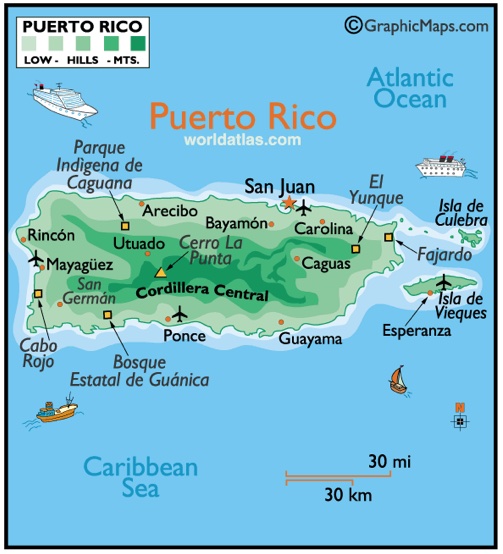 In September 2017, Hurricanes Irma and Maria made landfall in Puerto Rico causing widespread destruction and exacerbating challenges in a region already coping with long-term economic issues.

Given the scale of the disaster, the limited response resources and the emergency services severely compromised, the residents lacked electricity, food, and water for a prolonged period; furthermore, roads were obstructed, and residents had limited access to medical care2. Several federal agencies have supported the Island in its disaster recovery plan including economic recovery and resilience, physical infrastructure and human recovery.

The official languages of Puerto Rico are Spanish and English with a literacy rate of 92.40 %.3

Health Services: The provision of health services is organized by levels of provision, beginning with enrollment in a benefits package under an insurer and followed by primary services, secondary and tertiary services. The population with low income could access health services through the Government Health Plan (PSG). For 2020, the PR Health System is made up of 68 hospitals island-wide with 13,467 certified beds and 10,162 active beds.

Demography: The population of Puerto Rico is very homogeneous with 98.9% identified as Hispanic or Latino, according to 2019 estimates provided by the Census. In terms of gender, 52.5% of the population is female. For 2015-19, 76.5% of persons age 25 years and older were high school graduates or higher.

In 1990, the population had an expansive structure, but now it has become regressive, with greater aging (21.3% of the population was over 65 years old in 2019).

Sociocultural determinants of health: In Puerto Rico, determinants such as lower economic income, less schooling and access to medical insurance are common sociodemographic characteristics of health conditions. In addition, in Puerto Rico there are disparities in the provision of health services that place certain population groups in the position of total exclusion; particularly immigrants and the population not insured by medical plans are the most affected compared to groups that, for some reason, have restrictions on access to health services. According to Puerto Rico Behavioral Risk Factor Surveillance System (PR-BRFSS) data, the population between the ages of 25 and 34 has the highest percentage of people without health insurance coverage; 9.6% of persons under age 65 don't have health insurance. These people are of productive age, with a very unequal distribution, since 77% of the population generates or receives less than $25,000 per year; this could prevent them from having access to the government health plan, while these low monetary resources make it impossible to pay for private health insurance.

According to Law No. 35 of June 28, 1994, hospitals that have an emergency room or stabilization room are required to provide the necessary services to all with health emergencies and to women who are in labor. Under this law, the hospital cannot deny service to anyone if they cannot afford to pay.