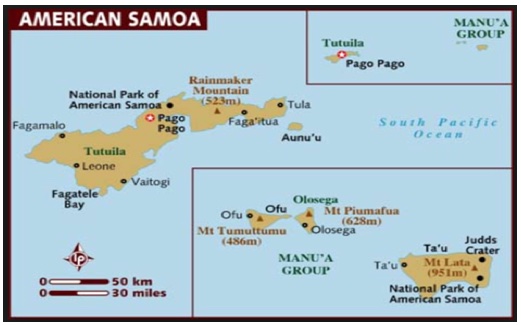 Geography: American Samoa (AS) is the only US presence in the southern hemisphere. The main island of Tutuila is about 76 square miles and houses 90% of its population. The population is primarily Polynesian with 88% Samoan and 3% Tongan, while 3% are Asian and other small groups comprising the rest, 14%. The languages spoken are Samoan and English with most residents being bilingual; 30.3% of the population is under 15 years of age. Most of the land is communally owned with a very strong and active chieftain system still in place.

Demography: The per capita income in AS is the third lowest in the US (see Table below). Compared to the US, residents of American Samoa have lower literacy, low income, higher mortality rate, spend less on health, and die younger. American Samoans spend 90% less ($500) than Americans ($6,719) on health care per capita. Also, American Samoa is one of the three US-Flag Territories eligible to receive assistance from the Medicaid and Medicare Programs for health care. Unlike the other US states and territories, American Samoa has an 80% presumptive eligibility for Medicaid benefits, which assures 80% of the resident population can receive services despite their ability to pay.

Sociocultural determinants of health: There is an alarming rise in health issues related to the increase in chronic diseases associated with lifestyle, with their roots in improper nutrition and physical inactivity. There is a significant increase in the prevalence of obesity (age-adjusted prevalence of obesity among individuals age 25 – 64 years: women, 80.1%; men, 69.3%, with numbers showing higher percentages at increasingly younger ages. High prevalence of obesity is associated with the rise in NCDs including hypertension, cardiovascular diseases, cerebrovascular diseases, type II diabetes mellitus and its complications, arthritis, gout and some forms of cancer.

Health Professional Shortage Areas (HPSA) and Medically Underserved Areas/Populations (MUA/P) designations are based on geographic, demographic, and provider data. For example, for primary health HPSA designation, the more barriers to care there are, i.e., higher travel distance to the nearest source of care, lower provider to population ratio, high poverty rate, high infant mortality or low birth weight rate, and high dependency ratio, the higher the HPSA score indicative of higher unmet needs, poor access to services and providers, health disparities and poor health outcomes. American Samoa has high geographic area and CHC HPSA scores for primary care (20/19), dental (26/18), and mental health (18/18) (see Table 3 below). Based on these high HPSA scores, American Samoa has significant barriers to healthcare access and can benefit from technical assistance from the PIHOA PBPCO to accurately assess and identify barriers to healthcare access, and to provide technical assistance and coordination of activities for recruitment and retention of qualified providers and resources to improve access to healthcare services and providers.