A territory is a subdivision or an affiliated nation of the United States that is not a state and is administered by an appointed or elected governor and elected legislature. There are Pacific and Atlantic islands under US jurisdiction.

The Pacific Basin is comprised of six US-Affiliated Pacific Islands (USAPIs): American Samoa (AS), the Commonwealth of the Northern Mariana Islands (CNMI), the Federated States of Micronesia (FSM) including the main states of Chuuk, Kosrae, Pohnpei, and Yap, Republic of the Marshall Islands (RMI), Guam and Palau.  Of the six USAPIs, three are officially part of the US: AS, Guam (unincorporated territories) and CNMI (a commonwealth covenant). The RMI, the FSM, and the Republic of Palau, collectively known as the US Freely Associated States, are newly independent countries each of which has signed Compacts of Free Association (COFA) with the US government (FSM/RMI – 1986 and Palau – 1994). The COFA is an international agreement establishing and governing the relationships of free association between the US and the three Pacific Island nations. The COFA came into being as an extension of the US– UN territorial trusteeship agreement, which obliged the federal government of the US "to promote the development of the people of the Trust Territory toward self-government or independence as appropriate to the particular circumstances of the Trust Territory and its peoples and the freely expressed wishes of the peoples concerned" As a result, the COFA enable these countries to receive direct economic support from the US, and they are entitled to many, though not all, of the rights, benefits, and responsibilities of US citizens, including military service, and free migration to/from the US. They are also eligible for select domestic assistance programs, including many health-related programs administered through the US Department of Health and Human Services (DHHS). In exchange for this support, USAPIs grant the US various forms of political oversight, including the right to exercise strategic denial to military forces of other nations, and to retain military control of several million square miles of Pacific Ocean expanse. With the ongoing US geopolitical interests in the Far East (China and Korea), the Western Pacific Islands – Guam, CNMI, Yap (FSM) and Palau – continue receiving economic and military interest from both the US and China.

The total population of all six USAPIs is roughly 500,000 people, composed primarily of Pacific Islanders (Micronesian and Polynesians) who reside on several hundred widely scattered, and often isolated volcanic islands and atolls covering an expanse of ocean over five million square miles stretching across the International Dateline and five time zones. The region is home to dozens of diverse cultures with more than two dozen languages spoken. Travel among the main islands' urban centers/capitals is almost entirely by jet and considered international travel, which is considerably more expensive than comparable domestic flights on the US mainland. Flying from the furthest reaches of the USAPI to Hawaii takes more than eight hours of flight time. As an illustration, Palau (in the Western Carolines) in December, from east to west, is 10 time zones distant and just under 24 hours flight time from Washington, DC with no layovers. 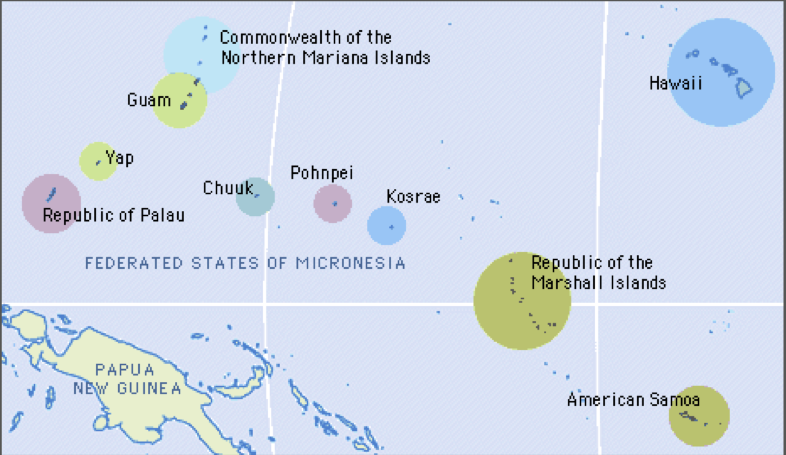 The USVI, with its three main islands and some 50 smaller islets and cays, and Puerto Rico are geographically close to the British Virgin Islands and other Caribbean islands and fall under the Atlantic time zone. Previously known as the Danish West Indies, the US VI islands were sold to the US in 1917. The population in 2018 was about 107,000 most being of Afro-Caribbean descent. English is the official language. Puerto Rico includes the main island and several smaller islands, with 3.2 million residents in 2018. Previously a Spanish possession from 1493, residents became US citizens in 1917. Residents primarily speak Spanish and English.

The USAPI and USCI have geographic areas, facilities, and populations with significant barriers to healthcare access. These include undersupply of qualified healthcare workforce, undertrained workforce, limited services, and high rates of poverty. Geographic barriers to care include excessive travel distances and costs to nearest source of care. Health and social indicators are significantly worse compared to the US states. Furthermore, Pacific Islanders have low per capita income, high poverty, high population density per square mile, higher rate of dying during the infancy period and among those who survive, their life expectancies are 4 – 7 years shorter than the US. Multiple hurricanes and the COVID-19 pandemic have had major economic, infrastructure and health impacts.

In 2018 ASTDD received funding from the Centers for Disease Control and Prevention, Division of Oral Health, to "assess and report on oral health program infrastructure and capacity, identifying strengths, gaps and needs for the US Affiliated Pacific Islands and the Caribbean islands of Puerto Rico and the US Virgin Islands."